The Carbon-neutral Helsinki 2035 Action Plan sets ambitious objectives for the City of Helsinki regarding the reduction of emissions and sustainable construction. In order to assist the design and construction of service buildings, life cycle steering and costing have been developed in Helsinki. They aim at responding to this challenge.

The objective of the Energy Wise Cities project is to develop the calculation of the carbon footprint regarding the life cycle of buildings, as well as their life cycle costs. This way, it will be possible to compare various alternative solutions during the initial phase of the planning work. The Cities of Helsinki, Tampere and Turku have together investigated calculation tools and methods – dealing with the carbon footprint and life cycle costs – that are suitable for buildings.

The City of Helsinki’s objective is to be carbon neutral in 2035. This aim brings a major pressure for change regarding the planning and implementation of the City of Helsinki’s new buildings and buildings that are to be renovated, as all phases must take into account the impact of the decisions on greenhouse gas emissions and life cycle costs. Before an individual premises project is launched, it is assessed at the service premises network level whether existing building stock is renovated, or whether it is demolished and new buildings constructed on its place. When studying different premises options in the future, it must also be found out – in addition to the investment and operating costs – how the premises affect the life cycle costs and the carbon footprint. This will support decision making.

The goal was to develop and describe a method with the help of which life cycle emissions and costs can, fairly easily, be estimated as part of service premises network analyses. The challenging part was to carry out the comparison with the help of rough initial data, without any help from planners, plans and reports. The future objective is to constantly develop the method along with the accruing data and experiences, making the method an integral part of the service premises network analyses, in a way that the results steer the selected overall solution.

The cooperation of Bionova and Sitowise resulted in a method description for the implementation of the life cycle’s carbon footprint and costs, as part of service premises network analyses in Helsinki. The method is founded on the low-carbon assessment method of the Ministry of the Environment. The assessment method is based on Bionova’s OneClickLCA life cycle costing software, which is used extensively in Finland.

The method was tested, at a theoretical level, in the Ala-Malmi district in Helsinki. Two alternatives were studied regarding the implementation of the premises for a daycare centre and two schools. The life cycle assessments were made for two main scenarios in which the volume of new construction and renovation, as well as the locations of the buildings, were somewhat different. As regards the new construction, the different scenarios particularly examined the effect of the structural frame on the life cycle emissions and costs.

The trial run of the method developed by Bionova and Sitowise brought up some challenges dealing with the calculations, such as the arduous collecting of the necessary initial data. During the trial run, it was also noted that the perspectives dealing with service premises network analyses are always complex and new matters will probably emerge in each analysis.

It was also recognised that life cycle costing dealing with service premises network analyses was more challenging than the calculation of a carbon footprint for an individual construction project. The life cycle costing that was carried out as part of the service premises network analysis was made more difficult by the fact that there is a scarce amount of initial data available, the projects span over a long period of time, and the commensuration of the entities that are compared and calculations made of them is not always very straightforward. However, those drawing up the method have excellently attended to the above-mentioned views. The method already functions well as such, as a basis of the instructions regarding life cycle costing that will be carried out in future service premises network analyses in Helsinki. 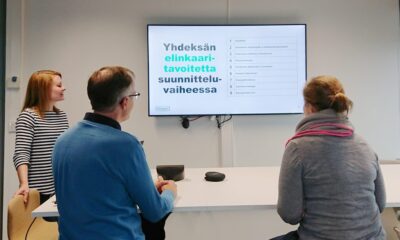